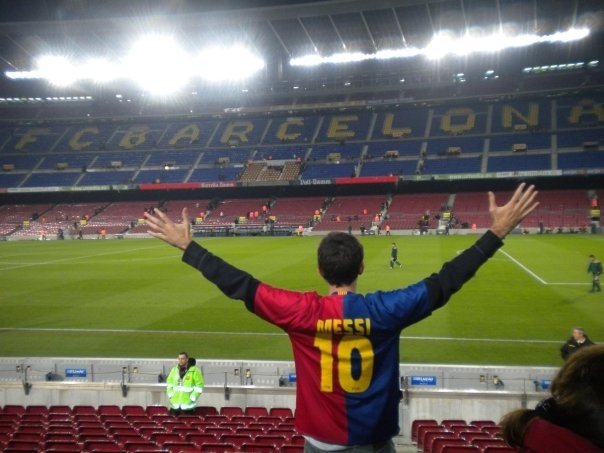 In honor of the upcoming World Cup 2010, I wanted to share with all of you my first experience seeing a fútbol match live! Living in Europe (especially Barcelona), it would be a crime not to go to Camp Nou to watch a game. My study abroad buddy, Christian, came to live in Barcelona because he’s a big fan of FC Barca. He must have been the most excited person at the largest stadium in Europe (according to the official website). With his suggestion, we decided to purchase tickets to see one of the last games held in Barcelona that semester. I have to admit that I don’t follow this sport (sorry!), but luckily, Ray and I sat in front of other study abroad students who knew the game well, and we listened to their commentaries as we watched the game. We even got to see Messi play and score twice in five minutes! We started a stadium wave that went all the way around the stadium and came back to us at least six times! I love Spanish people! It would have kept going if we didn’t decide to stop because it was too much of a distraction to us from watching the game. FC Barca was victorious at the end of the night! Go Barca!

Coming back to the United States a month later, Ray and I went to the Insight Bowl in December 2009. The Sun Devil Stadium looked super tiny compared to Camp Nou. I can say that Camp Nou was at least triple the size of the Sun Devil Stadium. So tiny!