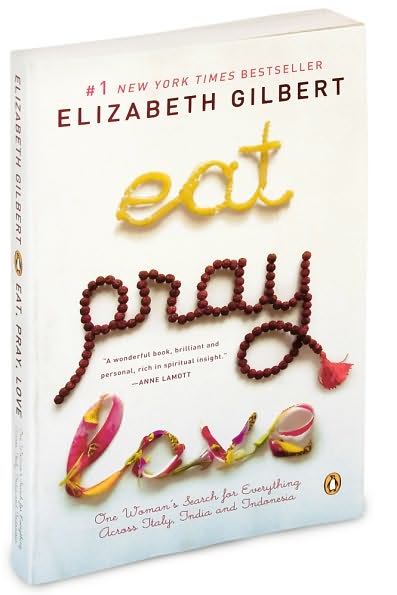 See how somebody can grow as a person while traveling, and how traveling can be therapeutic. 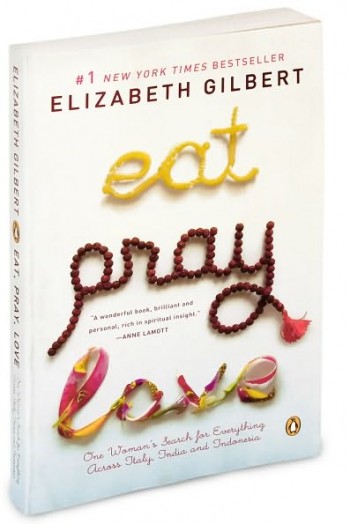 Last year during my quarter-life crisis, trying to figure out where my life is headed, I watched Eat, Pray, Love starring Julia Roberts to quench my chick flick thirst. I have to say, I didn’t like it.

I wanted to give the story another chance by reading the book as books are always better than the movie. Eat, Pray, Love is a story about self-discovery. It starts with her being confused about what she wants to do with her life. To follow society’s traditional life path or go off and discover what else the world can offer her?  This is what I was struggling with last year. As she begins to realize that marriage isn’t really what she wants, I was realizing that working in a corporate environment doesn’t seem very appealing to me anymore. Society says you should find a good job, get married, and have kids. Elizabeth and I feel as if there is something more. I gave the book a shot because I needed some guidance from a female figure who have been there. As a traveler, I feel like I could relate to her.

I’ll be honest. I hated the beginning of the book. There was more complaining and whining than I could handle. Maybe it was therapeutic for her to write as it is kind of an autobiography, but the book made up for it by having interesting facts about Italy, her first of three destinations. I loved reading about her enjoyment living in Italy and learning Italian while also discovering its rich history. I love learning about how each of her multicultural friends perceived Italy and its culture. That’s what made me keep flipping the page.

I’m sure glad I did as the book gets better and better. She goes on to an Ashram in India to practice meditation. I learned so much about the benefits of meditating that she made me want to go on a retreat myself! She talks about religion and how every religion goes for the same goal, but has different means of doing so which causes the conflict. My favorite quote from the book about religion:

“The Indians around here tell a cautionary fable…For hours a day, the saint and his followers would meditate on God. The only problem was that the saint had a young cat who used to walk through the temple meowing and purring and bothering everyone during meditation. So the saint, in all his practical wisdom, commanded that the cat be tied to a pole outside for a few hours a day, only during meditation, so as to not disturb anyone…the habit hardened into religious ritual. Nobody could meditate unless the cat was tied to the pole first. Then one day the cat died. The saint’s followers were panic-stricken…In their minds, the cat had become the means. Be very careful not to get too obsessed with the repetition of religious ritual just for its own sake…it may be useful to remember that it is not tying of the cat to the pole that has ever brought anyone to transcendence, but only the constant desire of an individual seeker to experience the eternal compassion of the divine.”

This quote was eye-opening, and it made sense to me. It doesn’t matter how you live your life as long as you choose to do good unto others, which is most religion’s ultimate goal. It doesn’t matter what you or your neighbor believes in as long as life is lived righteously. If only this was a lesson that all religions teach first, there might be less disagreement on what is better.

I found the quote that made me even more relaxed about my quarter-life crisis.

“A Sanskrit word appeared in the paragraph: ANTEVASIN. It means, ‘one who lives at the border.’ In ancient times this was a literal description. It indicated a person who had left the bustling center of worldly life to go live at the edge of the forest where spiritual masters dwelled. The antevasin was not one with the villagers anymore–not a householder with a conventional life. But neither was he yet a transcendent–not one of those sages who live deep in the unexplored woods, fully realized. The antevasin was an in-betweener. He lived in sight of both worlds, but he looked toward the unknown.”

The trouble that I was having is that I was torn between feeling like a “successful” person according to society’s definition of it and my own definition of “success” to just plainly be happy. Should I go on pursuing my career in the corporate world? Or should I continue my search for a job outside of an office? Which position will I be the most proud in? Which position will I be the most happy? The pressure from society to live a certain way makes my decision difficult. I realized that it’s okay to be in between, and you’re never too old to explore possibilities. 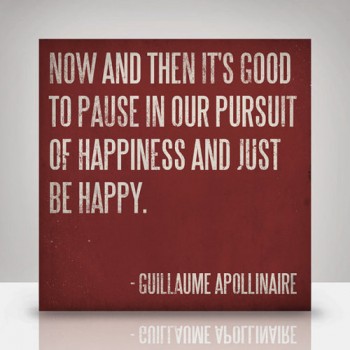 This is definitely an interesting read, and I learned a lot. It was enjoyable to read about three countries that I have never been to and to follow Elizabeth on her journey through them. Not only do you learn about each country’s history, you also learn about enjoyment, religion, and soul mates.