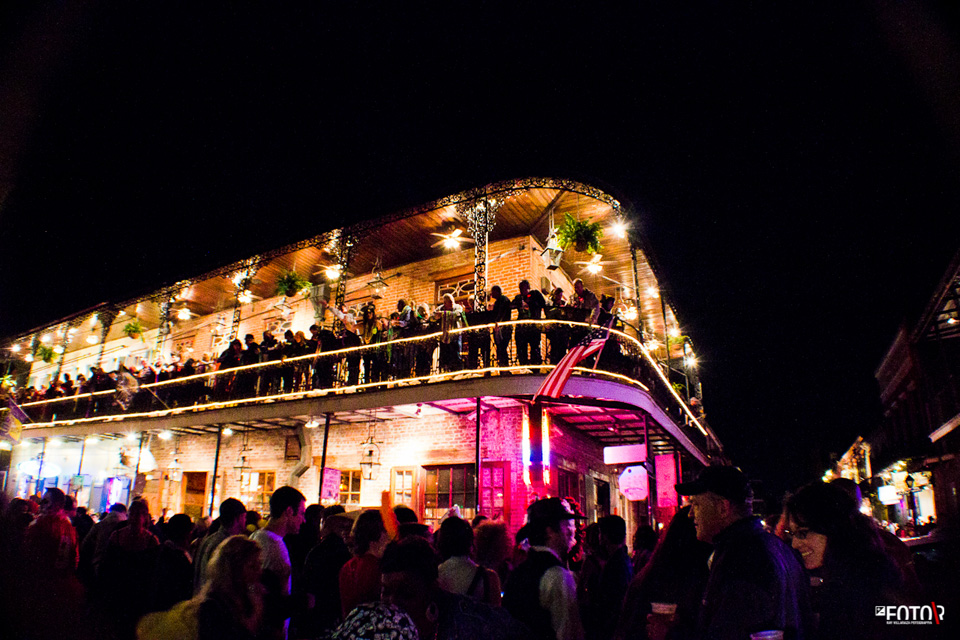 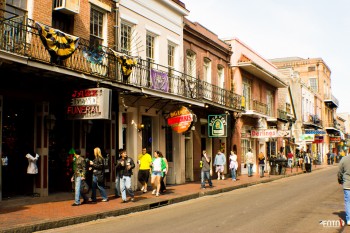 New Orleans, Louisiana wreaks culture all over its streets. The infamous Bourbon Street has its own personality, and it never seems to stop partying. Ray and I had the opportunity to visit this southern state during Halloween for the Voodoo Music Festival last year, and it’s very memorable to say the least. The friendly residents are very proud of their city and can’t wait to tell you all about it.

Some people compare it to its western counterpart, Las Vegas. After much thought, I have to say that they are polar opposites. Yes, people come to these cities to drink and be merry, but they are for two different types of partying. Las Vegas is highly commercialized and being a high roller is a must. You can expect to spend big bucks at the clubs there and the dress code is super sexy. Big clubs, big bucks, and high heels. New Orleans is more about the culture. You can tell by the name of the clubs. It isn’t too expensive to get wasted here with your comrades dressed in jeans and flip flops. The south and the west are just two different animals.

The bar names are creative and fun! The Funky Pirate and Boondock Saint are two of them. There are a myriad of bars here, so it’s gonna be difficult to remember which ones you went into. Each of them has their own style and personality. 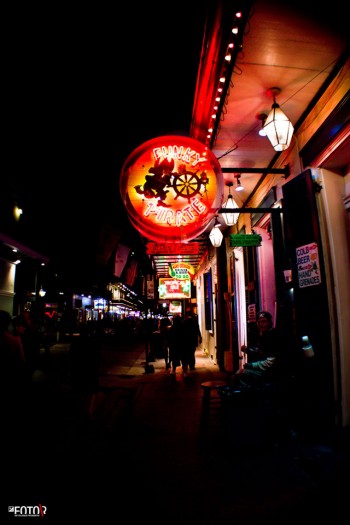 Once you step on New Orleans grounds, it’s not difficult to figure out that they love the Saints, the fluer de lis, and their festive colors green, purple, and gold. The more you see of city, the more you conclude that it is culturally unique. It is a mixture of different styles that work well together. 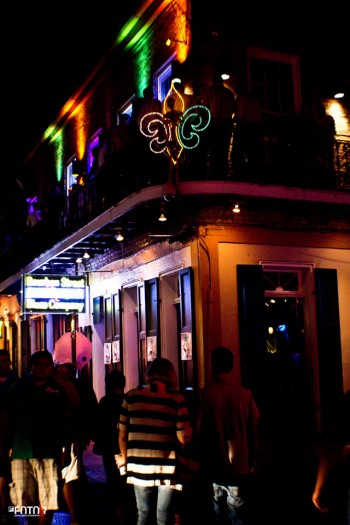 I don’t know much about the Voodoo culture, but I did enjoy seeing these in the streets. I wish I could stay longer to learn about it.

There are a lot of cities who call themselves the music capital, but I just love that this city has its own vibe. Everywhere you walk on Bourbon Street, you will hear live music from a bar somewhere. The party doesn’t stop when you walk out of the bar. 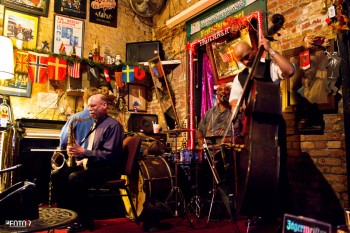 It is so easy to get smashed in NOLA. The huge ass beers were only $6. And guess what? Instead of food stands, they have shot stands. You don’t even have to walk into a bar to get your party on! I’ve never seen shot stands in the streets before. Definitely a place to be for partiers and alcoholics alike! 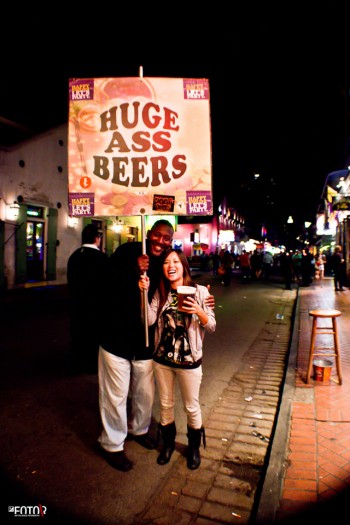 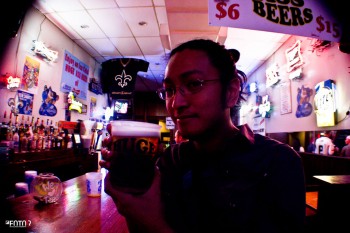 Ooh, it’s making me hungry just looking at this picture. This was our first night in New Orleans, and boy, was I starving! We got to Bourbon Street at about 9PM as I can remember. We were afraid that the restaurants would be closed, and just getting in from the airport, you know we were playing food scavanger. We found this gyro place and had the juiciest gyro! We loved it so much we went there the next night! Afraid that we might have to come back later that night after drinking, we asked the guy what time they close. Maybe soon? They close at 5AM! I’m falling in love with this place. 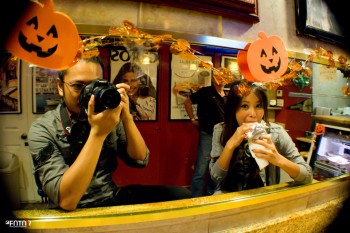 Compared to Vegas, what I loved the most about Bourbon Street is that…that’s it. It’s a street. It’s a small two-way street that the city closes off from cars at night so that people can drink freely without worrying about traffic. The street is so small that it’s easy to make friends. The whole place looks like a party! And like I said, you don’t even have to go into a bar to rock the night away. From the street itself, you can drink, hear music, and make friends! 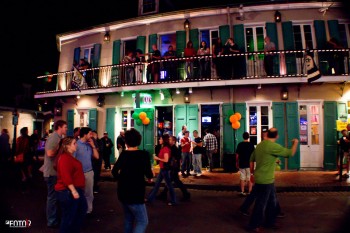 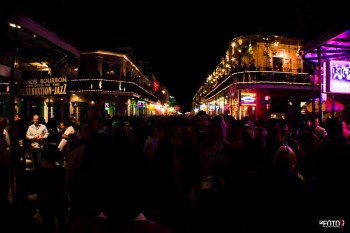 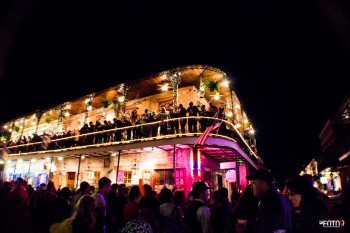 They are down to earth and love to party. They are so much fun and very welcoming! I can’t quite describe them as they are more of a vibe than anything. You have to go to feel it! 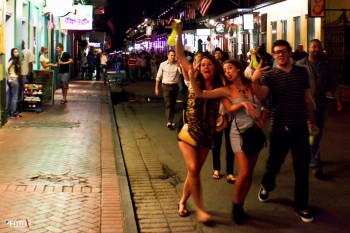 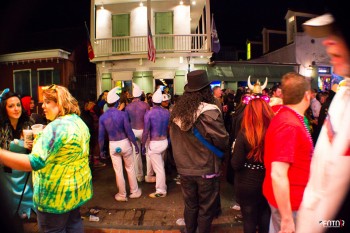 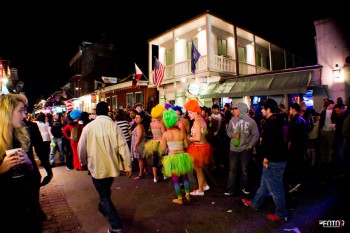 Oh no! The sun! It’s not so bad as you can still do the same thing you did at night…in the morning. We took a stroll down Bourbon Street before we left for the airport. It was nice to see what the booty…I mean the buildings look like. 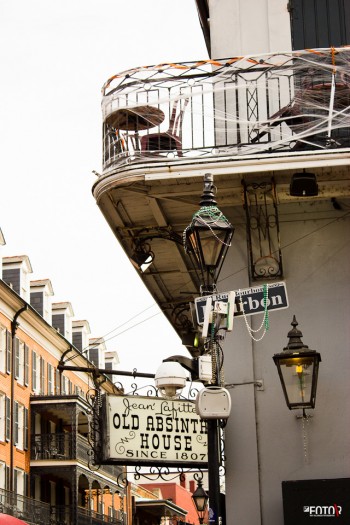 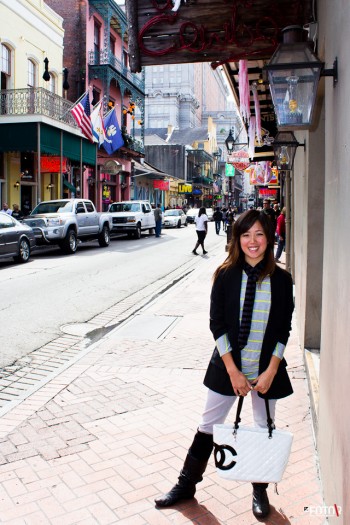 In conclusion, if you want a dressier party with a group of friends go to Vegas. If you want laid back style partying with an entire city, go to New Orleans. I don’t know if it’s because I live close to Vegas, but at this point in my life, I prefer New Orleans. From all the traveling I have done, I’ve learned that the people of the city are the main attraction, and they allow you to get close and personal to the city you spent money to see. It is much easier to meet people in New Orleans than it is in Vegas, and the city’s rules are a lot more relaxed:

Ray: Note to self: fights on bourbon street don’t get broken up, they get cheered on. Just saw a guy in a super hero costume fight a chubby guy with a penis on his forehead.

Afterthought: Yes, it smells like piss sometimes, but are you really gonna whine about that?

Did you go to Mardi Gras this year? What did you think of Bourbon Street?