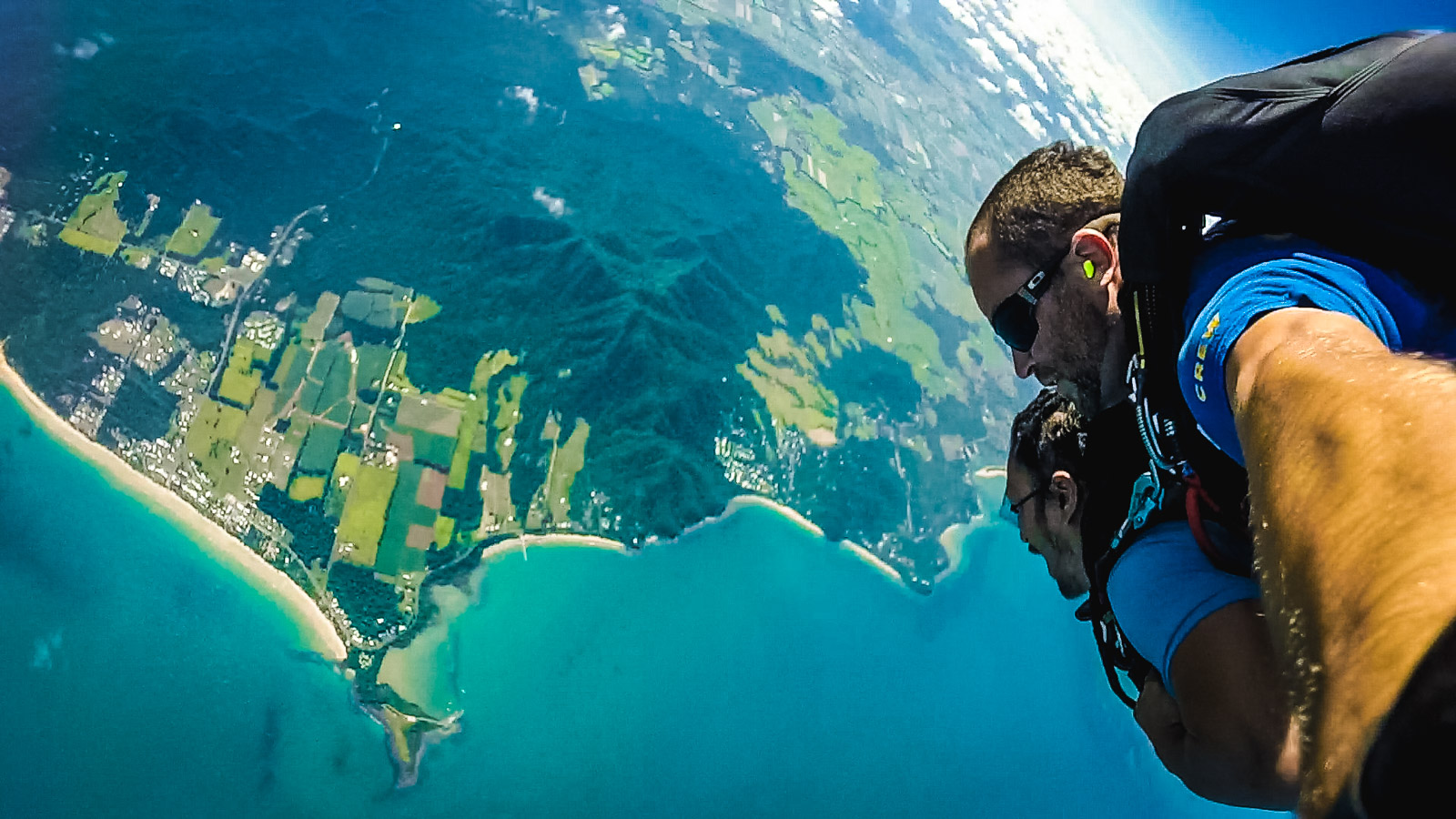 This was one of our bucket lists, and we can’t believe we got it checked off! It’s one of those huge accomplishments with not only skydiving, but also doing it by the beach! In Australia!! 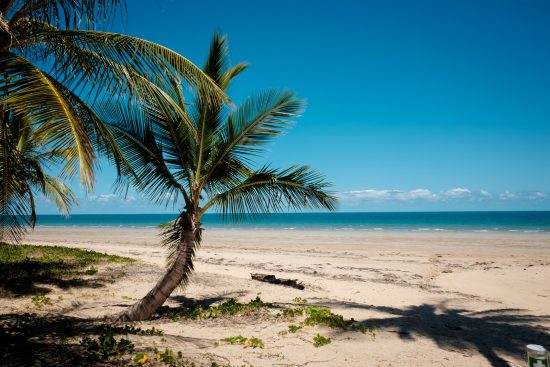 We signed up through Skydive Australia and was set to skydive Mission Beach! We got picked up by their van, got dropped off at the sign in location where we signed up for photos and videos! Then we waited until it’s our turn! We watched the skydivers land on the beach as we were waiting. Unfortunately, since we were in Cairns, the beaches are off limits because of all the dangers in the water! 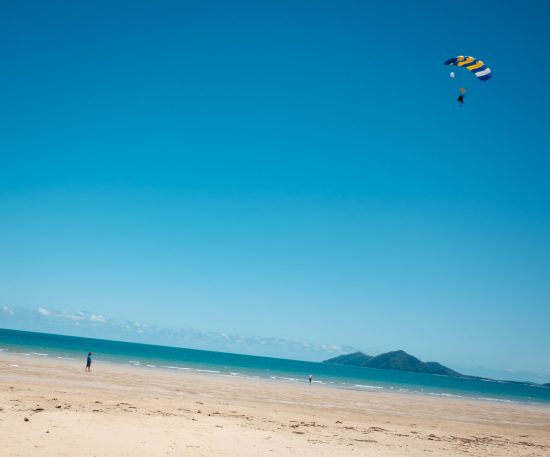 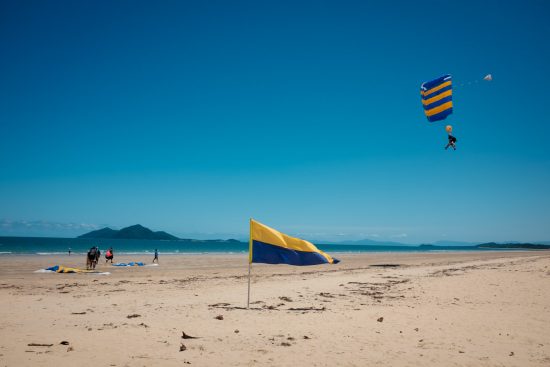 It was pretty cool getting to see people land and hearing their stories!

We finally get to ride the bus on the way to the plane to get our jump on! Arriving on site, the coolest feeling was seeing the small plane and walking up to it! I wish I had a video of it, but the feeling of seeing it knowing it’s what’s gonna take me up 13,000 feet is unreal!

Our tour guides were amazing! Ray got the guy who was super passionate and excitable about skydiving. He told us all about how small of a community it is and that skydivers know each other from all over the globe! His excitement for the craft was legit, and they actually dove out of the plane first! 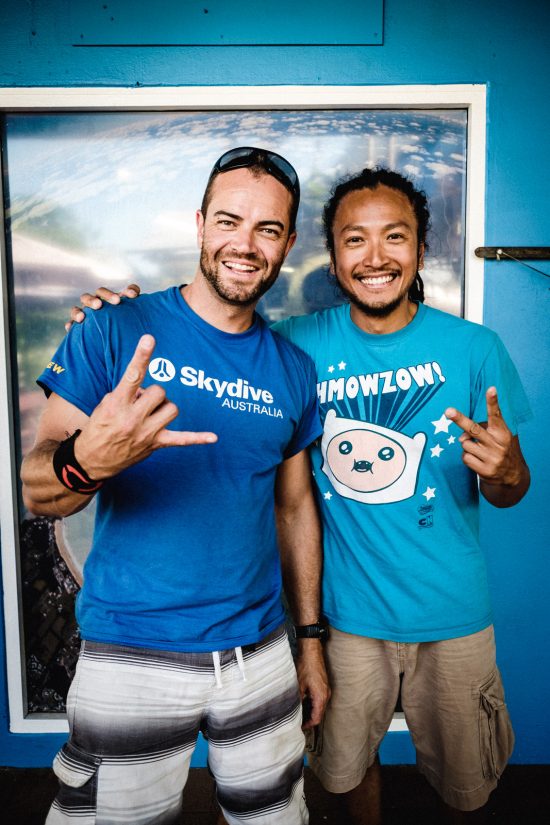 My guy seemed like the lead of the crew as he seemed to be in charge of everything. It was dope getting the coolest guides on the jump! 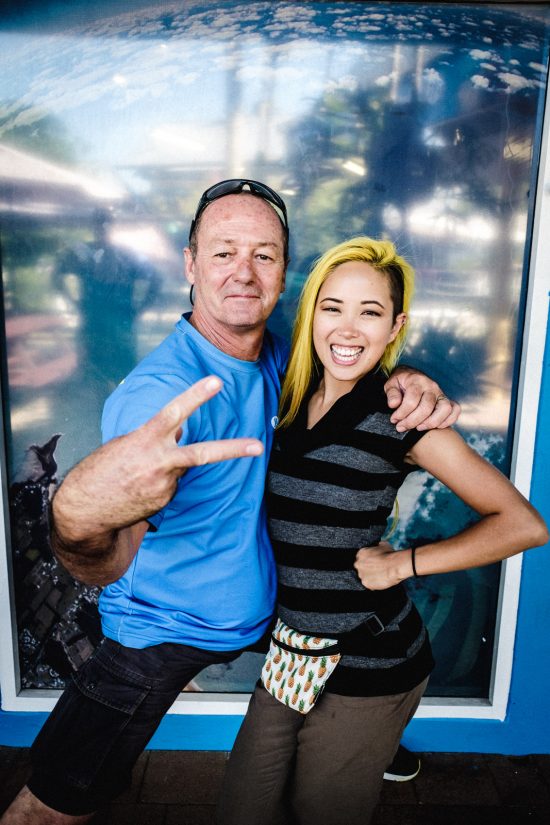 Ray and I have completely different experiences even though we were on the same tour, the same plane, the same everything.

I am not afraid of heights! I actually love it! I love peering over the top of tall buildings! Skydiving has been on my bucket list since I was in 6th grade when my cool, young teacher showed us her skydiving video! Fast forward to almost 2 decades later, I finally get to check this off! I didn’t know how to feel. While we were waiting, I felt like I was supposed to be scared, but I wasn’t. I may have pushed my feelings aside because I was so confused! That might be why I didn’t feel as thrilled during the jump as I expected!

Going up on the plane and seeing the site below was more than amazing! We were so high up there, we got to see the Great Barrier Reef from above! The cloud view is also amazing! 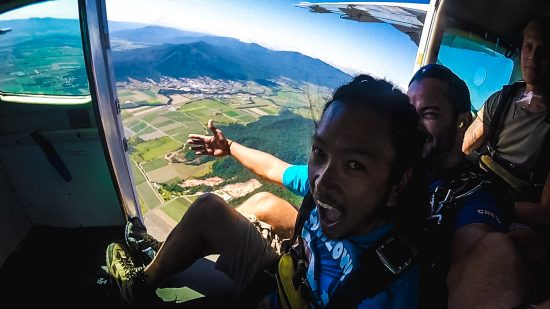 Overall, my take on it is…it’s not as thrilling as I thought! Only because I wasn’t scared AT ALL! It was one minute of free fall. If you think you’re gonna feel like you’re falling, you won’t! The wind is carrying you so much that it feels like you’re lying down on a bed! Totally not what I thought would happen! If you’re not afraid of heights, skydiving is easy peezy! What was amazing was the view! You are so high up, you get to see the curvature of the Earth! The water so blue, the land so green…Definitely skydive with a view!

The jump was super easy. I would say the most difficult part was when the tour guides spun you around after they had already opened up the parachute! I got pretty nauseous! He did let me spin myself around by tugging on the string, but I did not want to do much of that! 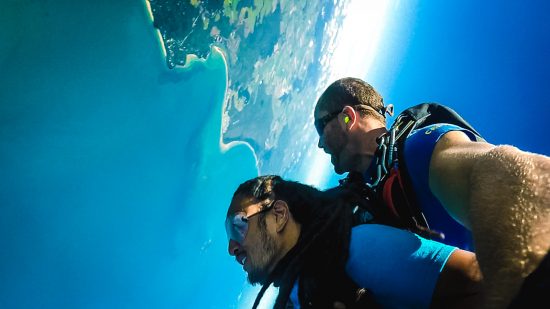 Ray, on the other hand, is afraid of heights. I have no idea how he felt, but he seemed very interested in what we were about to do. He asked the tour guide all kinds of questions! How to train, how many jumps, etc etc. He had theee best time everrrr!! He called family members and told them how amazing it was! He said his favorite part was jumping out of the plane, and seeing the plane get smaller and smaller as he was getting farther and farther away. 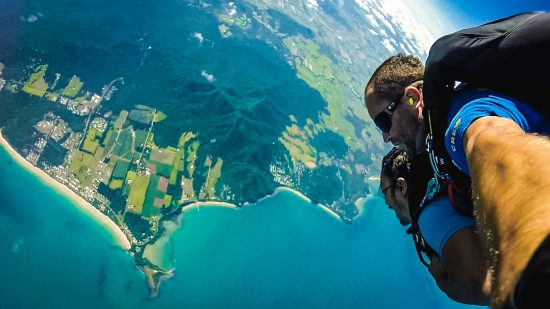 I do love seeing things from the top, so getting to see these views outside of an airplane in an open field was a once in a lifetime experience! 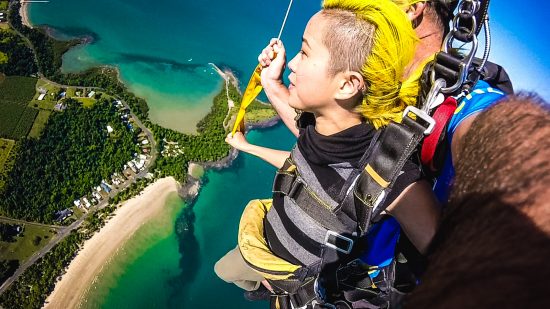 Landing was nice and easy! These guys knew what they were doing, and it was a very lovely day! Check out the video of our experience!

I’m definitely down to do this, again! To see another view of the Earth would be amazing! 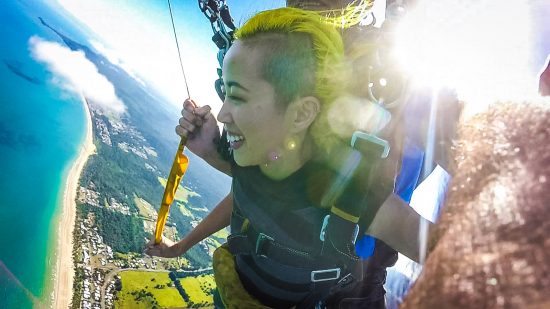 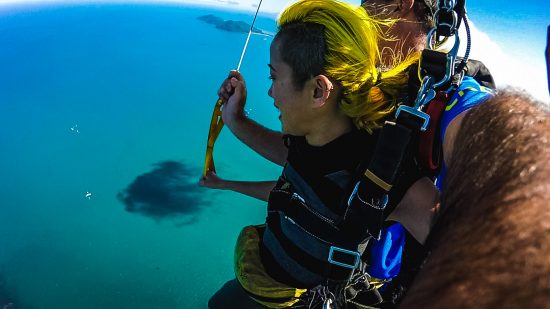 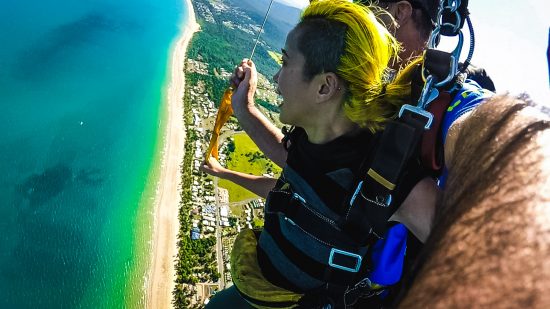 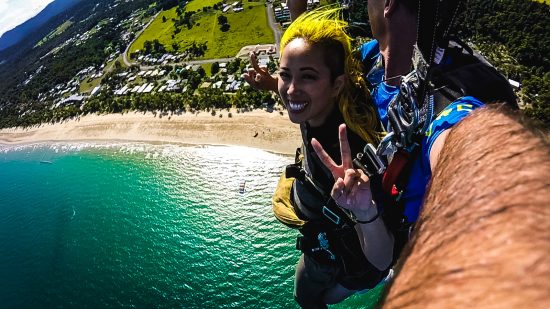 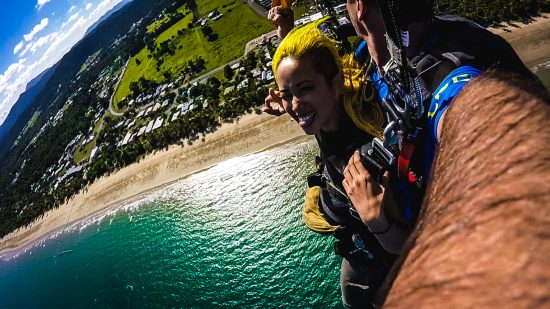 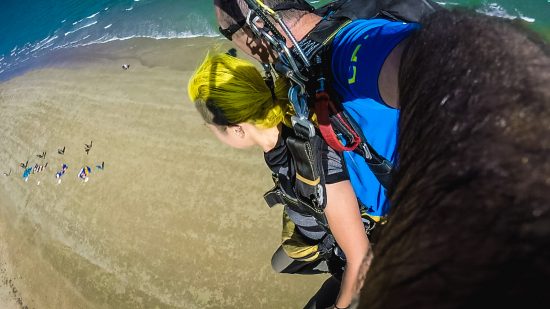 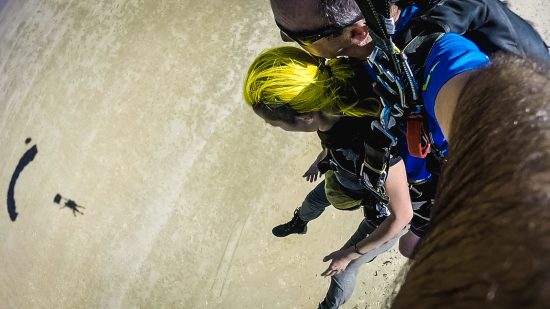 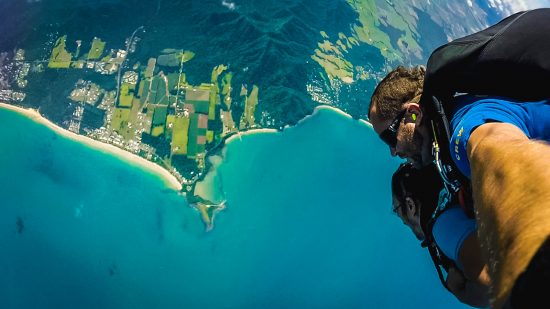 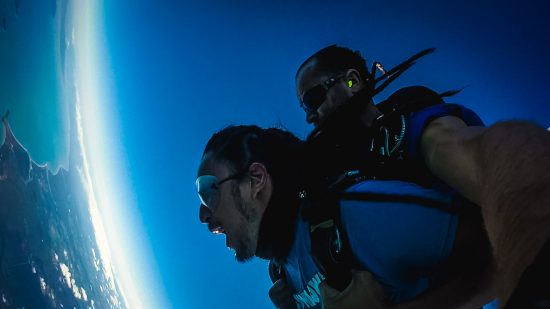 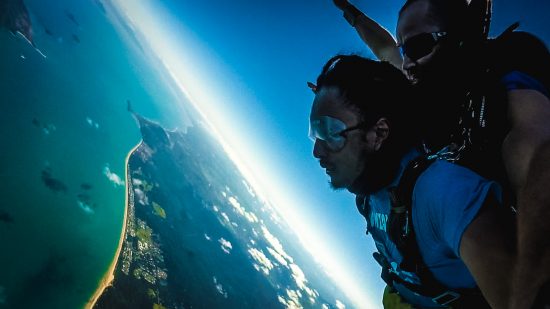 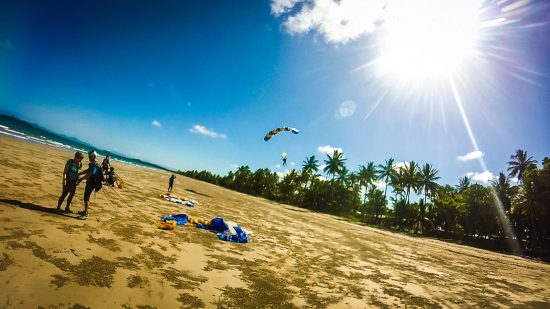